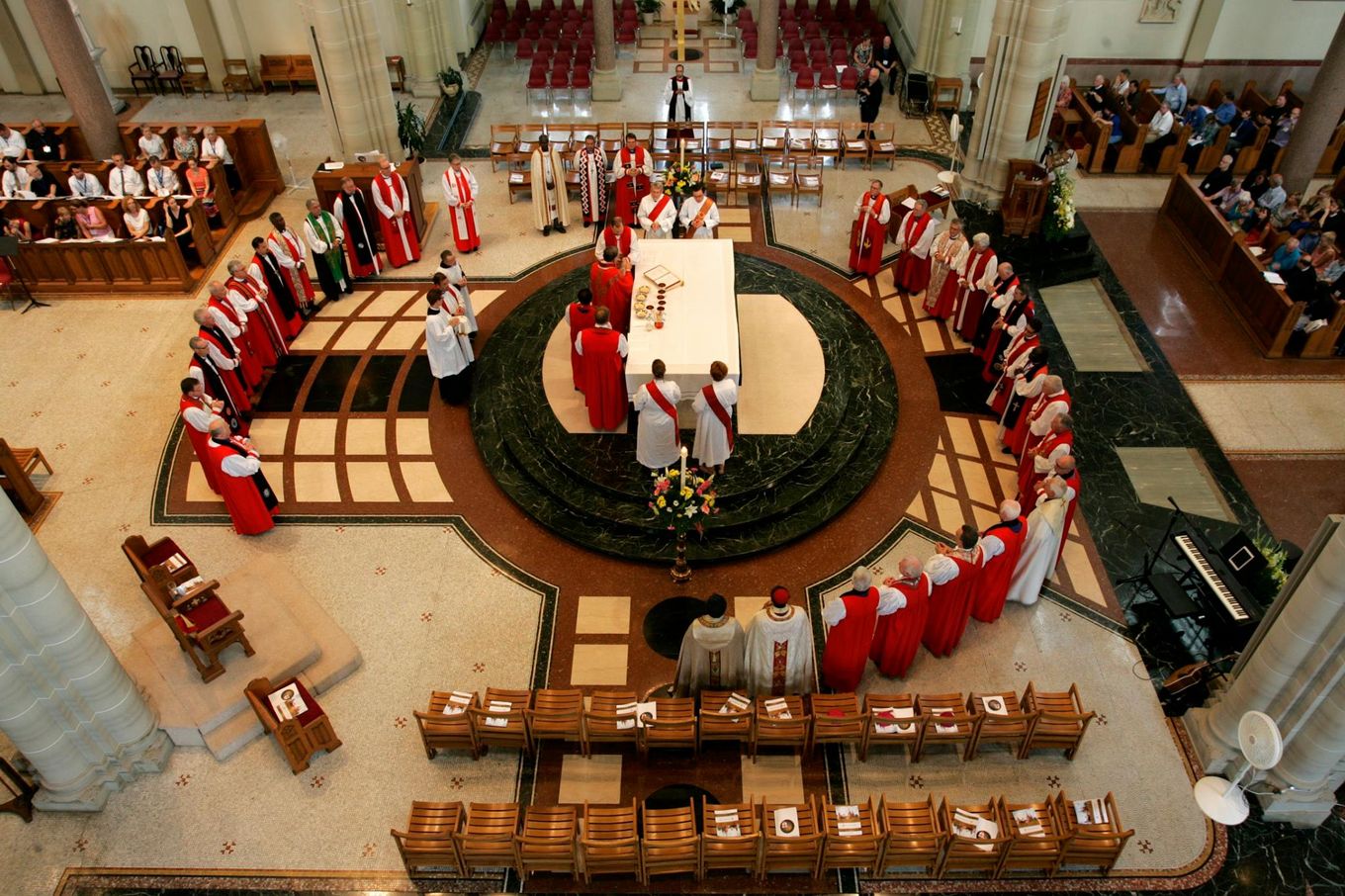 The ACNA Conclave, Council, and Assembly

These ancient words of the Veni Creator were said and sung many times over the three days that the Bishops of the Anglican Church in North America met in conclave. As the church waited, the bishops met over three full days to discern who the next Archbishop would be.

The Anglican Church in North America, like other Provinces, is made up of people who have many different points of emphasis and different understandings of priorities. Rather than engaging in a political process in which groups rally not only to win but also to defeat others, our bishops reported that they were committed to discerning the person whom God was calling and anointing to lead as the next Archbishop. They also said that they were committed to doing so in a way that unites the church. In order to do that, bishops shared their hearts and priorities. To engage differences in a way that preserves relationships took open communication and time—in fact, almost three full days.

There were several things which were notable and encouraging during the “conclave” where the next Archbishop was selected. First of all, each of the bishops was given three minutes to share what was on their heart in regards to the church and their view of the direction and priorities for the next phase of our life together. There was a lot of time for worship and prayer, with Scripture being both read and acclaimed as authoritative. There was also time for bishops to share their sense of “words from the Lord,” as distinguished from personal points of view for which there was also ample time to share. Each time someone spoke, there was time for weighing the words that had been given, seeking to honor not only our thoughts and decisions, but also to listen to what God was saying. Naturally, this is something which must be weighed very carefully and measured against Scripture, but the fact that God’s voice and guidance is taken seriously is a great encouragement.

Much of the time was spent articulating different senses of direction for the future of the church, and then resulted in an agreement of what was needed for the present. The process led to prayers of repentance and acts of reconciliation, prayers, brotherly hugs, and even tears. As relationships were strengthened, agreement on what next steps to take and how to engage challenges emerged. In many ways, this was a time of “being the church” and “doing the work of the church.” As trust increased consensus more readily grew, ultimately resulting in enthusiastic and unanimous selection of the new Archbishop. On Sunday afternoon the bishops’ shout of acclamation rose from the crypt under the Basilica and was heard by those nearby as they reached their decision.

The bishops are earnestly united and expectant for our common life and ministry as we celebrate the selection of our new Archbishop, and look forward to the next season of ministry with joy more united than ever as we move ahead to reach North America with the transforming love Jesus Christ.

Following the election of the Most Rev. Foley Beach as the new Archbishop, the Executive Committee and Cabinet met, preparing items for the Council. The Council, which is a body of Bishops, Clergy, and Lay people, debated and refined the business items and budget of the Province which were then presented to the full Assembly. The Assembly is the broadest decision-making body of the Province. It has the power to enact what is presented, or send it back to the Executive Committee and Council to be re-worked. Both things have happened before from the Assembly. It provides a chance for the most broadly based shared decision-making in the Province and allows for ownership of decisions through the Province.

Most of the Assembly time was taken pursuing the mission of the Church, with inspiring plenary sessions given by people like Eric Metaxis (Aurthor of Bonhoeffer: Pastor, Martyr, Prophet, Spy), Os Guinness, and Evangelical icon, Dr. J.I. “Jim” Packer (a dear friend). The idea is to encourage and further equip the church to reach North America (and the world!) with the transforming love of Jesus Christ. It was hugely successful.

Of course there was discussion of the Anglican 1000 movement, to “plant the first 1,000 new congregations.” The call from Archbishop Duncan five years ago for our brand new church to plant 1000 new ones was inspirational. It was also viewed as impossible. In fact, about 500 new churches have already been planted, with many, many more in process. It is a remarkable achievement and has resulted in many lives being transformed. It is part of our common life that will not be abandoned.

Over the last twenty years I have visited countless diocesan and Provincial Synods all around the world. I have been privileged to be a plenary speaker at about a dozen Provincial Synods around the Anglican Communion. As encouraging and wonderful as those meetings can be, the content and character of our Assembly here in North America (admittedly exhausting!) was as wonderful as one can find anywhere in the Anglican world. In fact, it was head and shoulders above the wrangling and political posturing that often takes place in some other Provinces. Those who are part of the Anglican Church in North America can be very proud of what is happening. Those in other Provinces would do well to take note. We have to grow in many areas, but there are also many things that can be learned from this young Province. The Lord is helping us reach North America with the transforming love of Jesus Christ.