A Communion is a relational network of churches and people who are “in Communion.” What that means in the literal sense is that they have Eucharistic fellowship, in other words, they have Holy Communion together. In the case of Anglicanism, it has been expanded to include a number of institutional protocols (like the transfer of clergy), but the heart of the arrangement is the ability to share Holy Communion.

When the Episcopal Church (TEC) and the Anglican Church of Canada (ACoC) moved away from Anglican faith and practice (especially in regard to sexual practice), many Provinces broke Communion with them. Both the previous Archbishop of Canterbury, Dr. Rowan Williams, and the current one, Justin Welby remained in Communion with TEC and the ACoC. They also have put heavy emphasis on the institutional structures. When many people in the US and Canada separated from TEC and the ACoC, the institutional structures did not respond. The GAFCON Provinces were quick to recognize the new Anglican Church of North America. Very shortly after that, the regional fellowship called the Global South recognized the ACNA as well.

Recently, in response to questions while in Ireland, the Archbishop of Canterbury stated that the Anglican Church of North America was not part of the Anglican Communion. It was a very bad week to posit that. Some very significant things happened that demonstrated that most of the Anglicans in the world do not agree with his assessment.

First example:
Shortly after the TEC House of Bishops met in Taiwan, a group went to West Malaysia. They announced that they had heard about the consecration of a new assistant bishop that was about to take place, and they were there to participate. Leaders in the Anglican Church in Malaysia said, “You are welcome—to our country. You cannot participate in the service however, because of the actions you have taken to tear the fabric of the communion and you remain unrepentant. We are not in Communion with you, so you cannot participate in the service.”

The visit was part of TEC’s initiative to demonstrate that they are fully part of the Communion and are in relationships with other Anglican Provinces even though they have been deeply criticized for "tearing the fabric of the Communion." The tactic has been used in a number of places in Africa where they visit, are received with hospitality (because that is the culture of those people), and then take pictures to demonstrate that there are no significant issues even though there may be disagreement over things like sexuality.

In this case, the TEC plan did not work in Malaysia. The leaders in the Diocese of West Malaysia are very well informed and steadfastly faithful. Not only did they turn TEC away, they knew I was traveling in South East Asia so they sent me a message. “Can you change your travel plans to be at the consecration we are having in Kuala Lumpur? We want to demonstrate that we are not in Communion with TEC, but we are in Communion with the ACNA. If you can get here, we’d like to make your visit highly visible.”

I was able to change my itinerary and arrived in time to participate in the Consecration including the laying on of hands for Charles Samuel, consecrated as Assistant Bishop for the Panang district of the Diocese of West Malaysia. Here is the official photo: 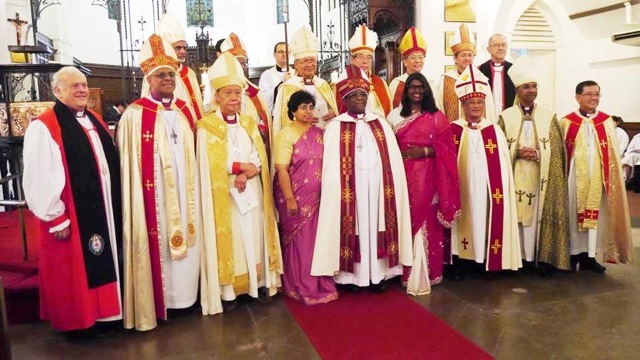 My invitation to participate in this consecration is not particularly significant because of me, but it is very significant. When the Diocese of West Malaysia (Province of South East Asia) refused to allow representatives of the Episcopal Church to participate in the service and made a point of inviting me, they demonstrated the fact that there has been a paradigm shift in the Anglican Communion.

Historically, there have been four “Instruments of Unity” in the Anglican Communion. They are:

Over the last fifteen years, all four of the Instruments have been compromised. Repeatedly, the Primates would meet and make a decision and The Archbishop of Canterbury would either modify it or nullify it. That was done most stridently by ABp Rowan Williams overturning the Primates’ call from Dar es Salaam for the Episcopal Church to turn back from their revisionist agenda. There were also decisions in Dromantine, Ireland, and well…actually it was all the Primates meetings where decisions were made and then overturned. As a result, a large group of Primates have refused to attend Primates Meetings until the provisions of previous decisions are actually put in place.

The Lambeth Bishops’ Conference in 2008 failed to gather all the bishops. More than 300 bishops refused to attend because those who had consecrated Gene Robinson as a bishop were invited. It was in that environment that the Global Anglican Future Conference (GAFCON) was born and met in Jerusalem.

The Anglican Consultative Council’s agenda has been completely dominated by revisionists causing many of the orthodox Provinces to lose interest.

Over the length of his tenure, Archbishop Rowan Williams skillfully steered the communion in a way that has institutionally enshrined the practices that deeply tore the fabric of the Communion. Initially, there was great enthusiasm for the new Archbishop of Canterbury, Justin Welby. Archbishop Welby shares the testimony that he came to faith in Christ through the Alpha movement and has experienced charismatic gifts of the Holy Spirit. His comments two weeks ago that the Anglican Church in North America “is not part of the Anglican Communion” were met with stunned surprise by many Anglican leaders.

In 2008, GAFCON in Jerusalem called for the launching of a new Province in North America; one that would be faithful to Anglican formularies. Upon the launching of the ACNA in 2009, all the GAFCON Provinces made declarations of Communion. Even more significantly, they wrote:

While acknowledging the nature of Canterbury as an historic see, we do not accept that Anglican identity is determined necessarily through recognition by the Archbishop of Canterbury.

GAFCON then claimed for itself the ability to recognize “authentic Anglican bodies” where they were encountered. The efficacy of their decision to recognize the ACNA as genuinely Anglican is seen in the fruit that most of the Provinces of the Communion—and certainly the vast majority of the world’s active Anglicans—not only share Holy Communion with the ACNA, but they also share in ministry together.

My invitation to the consecration in Kuala Lumpur (and the dis-invitation of the people from TEC who had volunteered to attend) is a graphic example of the new reality. What actually happened at the consecration was not dictated by what the Archbishop of Canterbury thought or said, it was constrained by the realities of relationships, both good and bad.

Last Thursday night, Primates from the Global Fellowship of Confessing Anglicans (the ongoing ministry of GAFCON) and from the Global South led the investiture of Archbishop Foley Beach as the new Primate of the ACNA. In the course of the service, the eight Primates who represent the leadership of the vast majority of the world’s active Anglicans said:

“Foley, we receive you as Archbishop and a Primate in the Anglican Communion.” 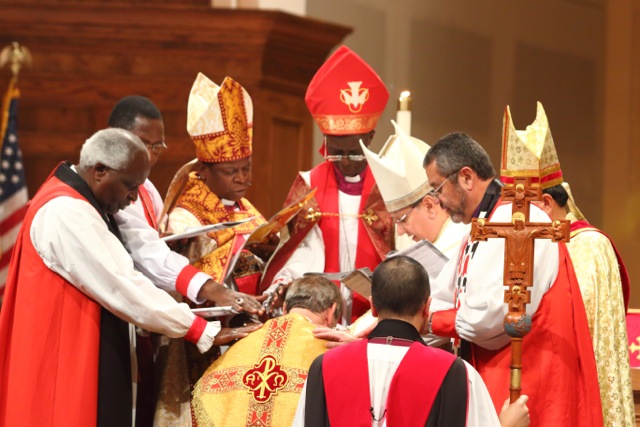 The next day, they reiterated that and expressly pledged their partnership and commitment to shared ministry in a written statement.

Next month, representatives from many mission minded Provinces will join the Diocese of Singapore for a Mission Roundtable. The ACNA will be there. TEC will not. Canada will not. The people who believe the same things are getting on with the mission of the church. Those who believe different things are left stuck in an institutional quagmire that isn’t doing Gospel ministry.

Here’s the rub: The Anglican Communion is not going to re-align, it has re-aligned. It is true that the structures have not yet caught up with that reality, but the re-alignment has taken place. Increasingly, those who pursue the liberal agenda of TEC and insist on maintaining partnership with them are finding that the fruit of their actions will continue to be increased marginalization.