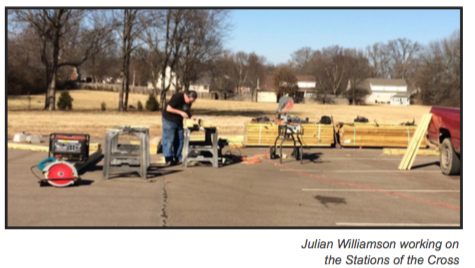 The Way of the Cross, or traditionally, the Stations of the Cross, is a spiritual practice of the worship and adoration of Jesus as we contemplate his journey to the Cross. The prophet Isaiah cried out, “He was pierced through for our transgressions, He was crushed for our iniquities; the chastening for our well-being fell upon Him, and by His scourging we are healed” (Is. 53:5). It is a pilgrimage into the sufferings of Jesus as we recall the scenes of his life prior to his death on the Cross.

The custom of praying and meditating on the sufferings of Christ, most believe, can be dated back to the days following the resurrection of Jesus. In Jerusalem, the street that Jesus is believed to have walked down to the Cross was quickly named the Via Dolorosa, the Way of Sorrows. This act of devotion was popularized later by Franciscan monks in the thirteenth century. Many Christians from all over the world took pilgrimages to Jerusalem to walk and pray at this site. However, travel became quite dangerous due to conflict in Europe and the Middle East. Many churches began constructing symbolic stations on their property so that parishioners could make spiritual pilgrimages while staying at home. Thus, the Stations of the Cross became a series of paintings, illustrations, or sculptures that depicted the final scenes of Jesus’ earthly life.

The Way of the Cross consists of fourteen stations or scenes. At All Saints, we’ll practice a liturgy designed by St. John Paul II. His version consists of scenes found solely in the Gospels. He also added a fifteenth station to celebrate the resurrection of Jesus. Whenever we remember the death of Jesus, we always remember the hope offered in our Lord’s resurrection from the dead.

Each Friday in Lent, we will offer a 45-minute Stations of the Cross on the grounds at 5:00 p.m. Try to make it a Lenten practice to attend one of these services during Lent. On Friday, March 16, there will be a Children’s Way of the Cross for families with small children.