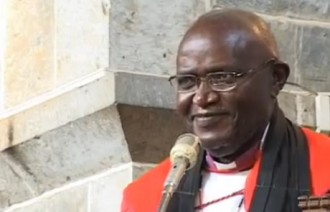 Archbishop David Gitari, the retired Primate of the Anglican Church of Kenya (ACK) died Monday at 2:10 pm. He was 76.

Gitari was one of those larger than life figures. He was absolutely courageous, brilliant, and committed to the implications of the Gospel in everyday life. He was marked for death by government hit squads and three times had to escape in the middle of the night when they came to kill him. One of the times, he escaped through the roof of his house and slipped into the jungle.

When I first met David Gitari, I expected to meet a giant and I was not disappointed. What I did not expect, however, was how hysterically funny he could be - and regularly was. He would smile with a broad grin and then succumb to the volcanic laughter that was rising inside and erupt with belly laughter. One day we were sitting in his office with our feet propped up. We were surrounded by great piles of papers arranged in some cryptic filing system known only to him, when he commented, "President Moi used to try to kill me. Now he prays for my health and safety because he knows if anything - even an accident - befalls me, he will be blamed!"

Gitari became a dear friend. When the Provincial Synod was considering my consecration, there were many questions because of the complexities. Eventually, the retired Archbishop sauntered to the microphone and said, "It's time. It's for the Gospel." The measure passed unanimously.

Appreciating humor like fine wine, over the years he would often say to me, "Atwood! Tell the story! Tell the story again!" He did that in many countries and places when we were together, punctuating meetings and gatherings of all sorts. Again and again, I would tell his favorite story and he would laugh as though he had never heard it before, convulsing with mirth that drew everyone else into raucous joy.

This week, as you are promoted into glory and join the Church Triumphant, I share "the story" again for you, Archbishop David.

I landed in Nairobi at Jomo Kenyatta Airport, cleared through immigration, and was passing through customs when I was stopped by an obviously very drunk inspector. With the exaggerated speech of the inebriated, he shook his finger at me and demanded, "Mzungu!" (using the Swahili word for white man), "What is in that bag? I have all the power! You have no power. I can put you in jail!"

"My clothes and personal items. If you put me in jail, my friend will come and visit me," I replied.

"Mzungu!" he said again weaving back and forth as he stood, "I have all the power! You have no power. I can put you in jail. What is in that bag?" he cried, pointing to my briefcase.

"My papers and my laptop. If you put me in jail, my friend will come and visit me." I replied.

"Mzungu, I have all the power! You have no power. I can put you in jail!"

I responded, "If you put me in jail, my friend will come to visit me."

Pausing, the inspector looked quizzically at me and asked, "Who is your friend?"

Turning away, he waved his hand and said, "Pass."

At that point, Gitari would collapse in gales of laughter drawing everyone else within hearing into the same.

I don't know how many times over the years he cried out, "Atwood, tell the story!" but it was many. Soon, when GAFCON gathers in Nairobi, we will remember him again and I'll tell the story.

As you approach the pearly gates clothed in the righteousness of Jesus Christ your Lord, I wager you will remember "the story" and laugh as St. Peter says, "Pass."